In the world of high-growth startups ConvertKit is an anomaly. We didn’t raise funding. We have no desire to sell. In fact, we don’t even have an exit strategy.

When asked recently when I’d consider selling ConvertKit I gave the same answer I always do: Not for at least ten years. A friend who had heard me say that before said, “Wait, that’s what you said last year. So shouldn’t it be nine years now?”

Nope. It’s not a clock that’s counting down. It’s a perpetual long-term focus. We’re just getting started on our mission and taking calls from potential acquirers and private equity firms is just a distraction.

So how do you go about rewarding the team in a company that you never plan to sell?

Why stock options aren’t the best for us

Stock options are the most common method, but it’s strange to compensate a team member with stock and immediately follow it up by saying, “Oh yeah, but we’re not going to sell.”

Options without an exit event just don’t have the same value as when you can expect to flip this startup and be on to the next one within five years.

And even when that is the goal it often doesn’t work out well. Out of all the companies I’ve held equity in, ConvertKit is the only one that has made me any money… Other than this $0.68 check I received last summer! 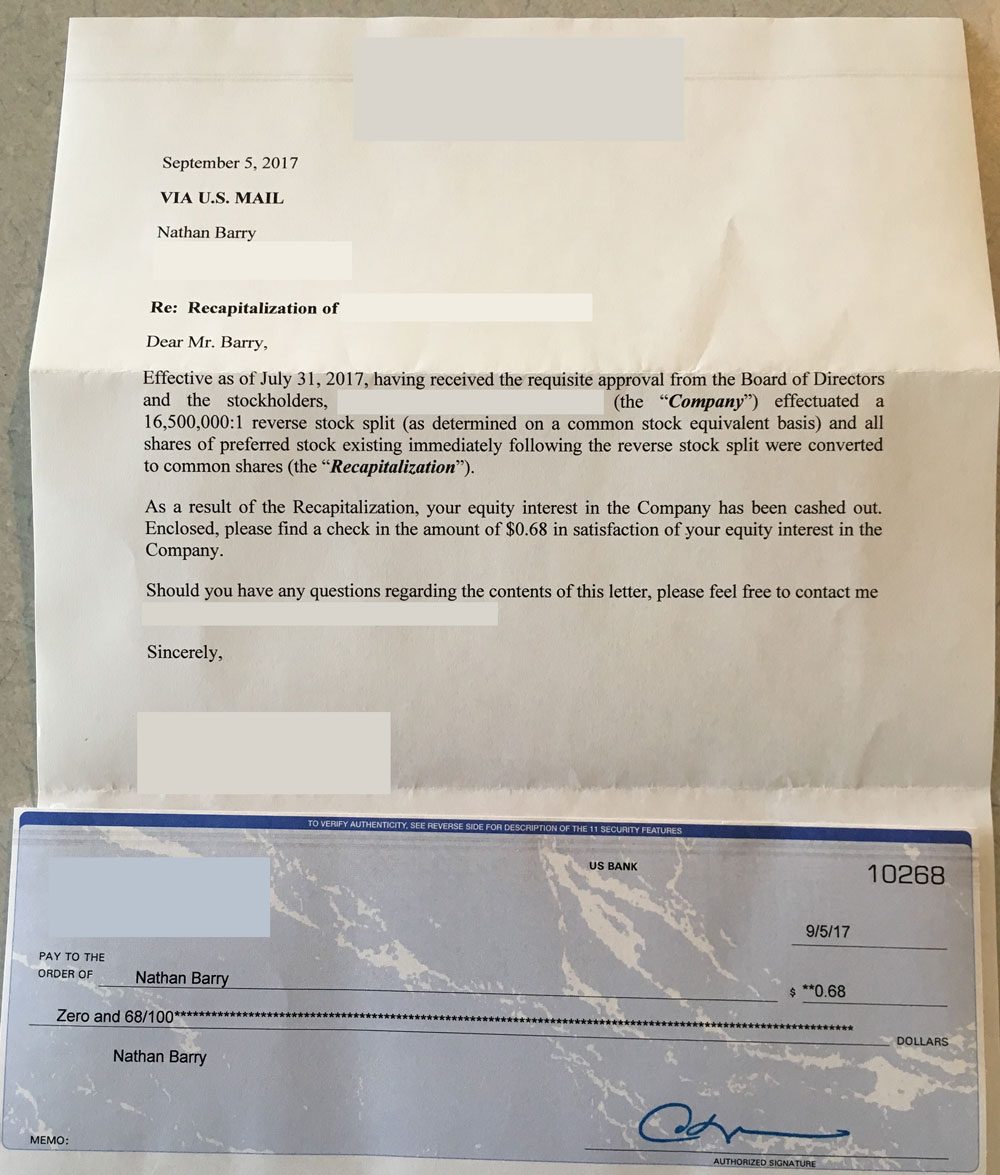 Instead of equity and stock we focus on profit sharing. It’s easier to understand and has a much more tangible benefit in the short-term. Let’s break down how we do it at ConvertKit.

In 2016 we had a big push to get profitable and build up our cash on hand. During that time we went from losing money to a 51% profit margin in just 5 months! You can read about that here.

Once we did that I wanted to reward the team through a profit sharing bonus. But we were so new that I didn’t know what system to use. Should salary be a factor? Performance? Time with the company?

For the first run at it we took a pool of $110,000 and divided it up between the team purely based on time with the company. We had 20 team members at the time and only two people had been with us for more than a year!

I wrote everyone’s start date into a spreadsheet, calculated the # of days from then to the date we planned to pay out profit sharing. In Google Sheets it’s a simple equation:

B2 is the cell that has the team members start date and D is telling it the format (days) to return.

This is simple and worked well since there was such a range in time with the company, but it’s too basic and not sustainable since it didn’t reward performance.

Since no one on the team knew that this was coming I wanted to surprise everyone at the retreat. So we got cards for every team member and wrote a personalized message to each person from each director.

Then a simple card is included that spells out the details of what will be deposited into their bank account. 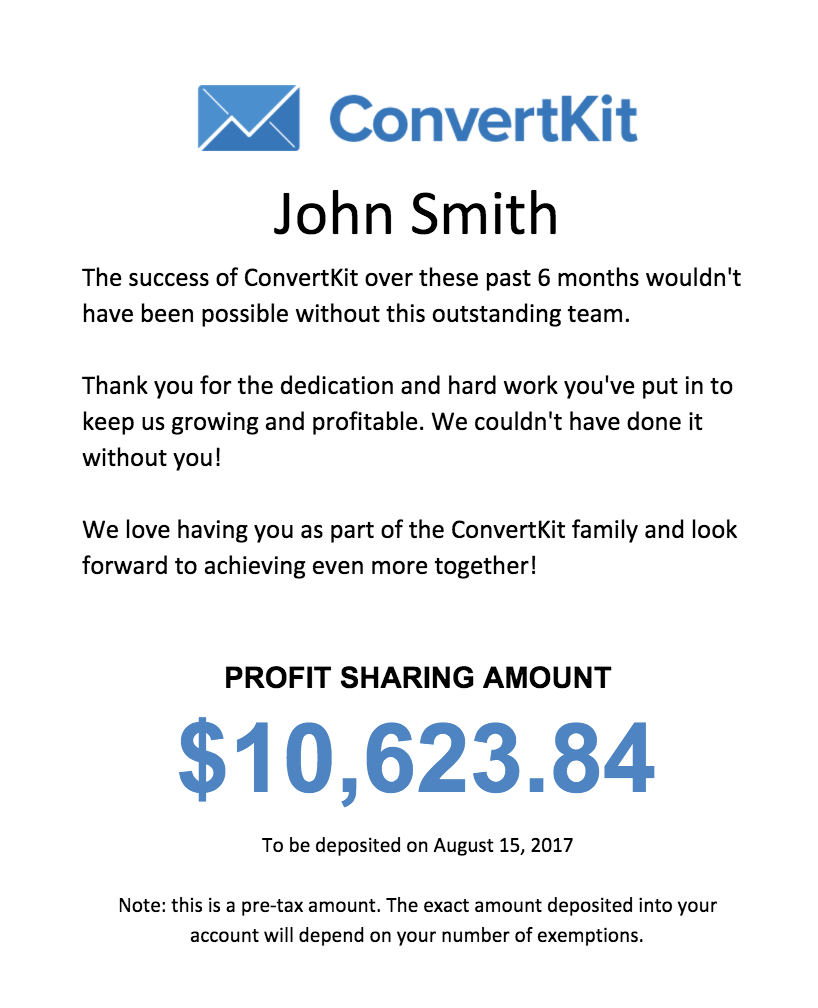 Everyone sitting in a circle opening their cards at once makes for a special moment for us all to share in the success of the company.

Round 2 — Designing a system

Our first round of profit sharing was a decent foundation, but for our next team retreat (we host them every six months) we needed a better system.

We knew that time with the company was going to be a factor, but it wasn’t the most important factor. Instead we wanted each team members individual performance to be the biggest driver.

After a lot of deliberation we came up with a simple system.

The immediate question is, what’s the scale and how do I get the highest score? It breaks down like this:

That’s the scale. The most important thing is that every three months every team member knows where they stand and has time to improve their performance before the bi-annual profit sharing.

Here is a sample spreadsheet (with random performance scores and names): 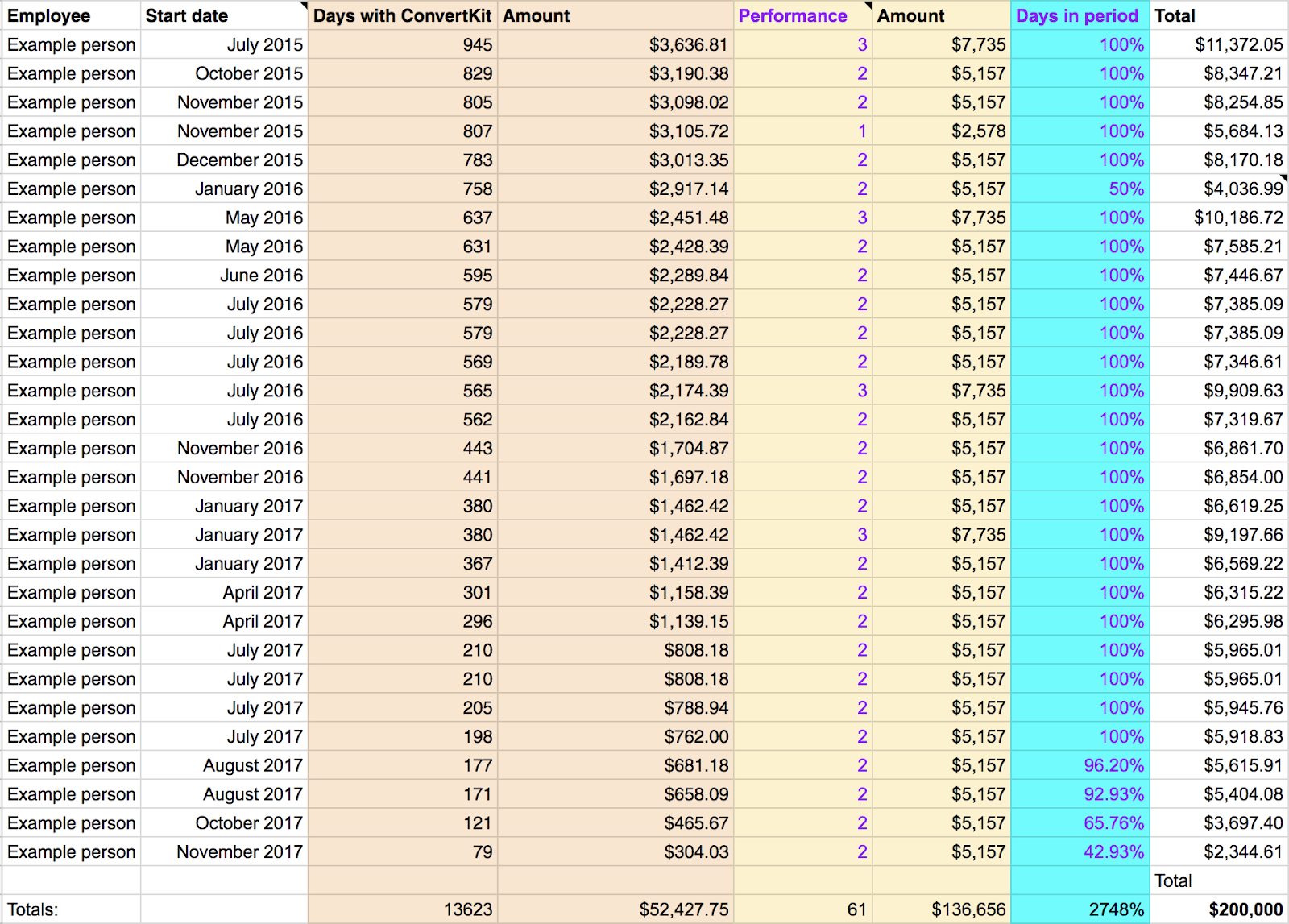 We expect everyone on the team to start making meaningful contributions immediately. Because of that we don’t require waiting any period until you are able to participate. That said it wouldn’t be fair to get the full value of performance points if you just joined for a portion of the 6-month period. So the last step is to multiply each number by the percentage of the period each person worked. For most that is 100%, but for anyone new that will be a smaller percentage.

Round 3 — The final tweaks

This system worked really well. The performance score setup took a little getting used to and a lot of conversations around what actually qualified as a 2 vs a 3, but we figured it out.

The only problem is that we were still up in the air as to what the final pool would be. Our first time it was $110,000 because that was what felt right. The second time it was $200,000, because… well it also felt right.

We wanted a better system so the team could really predict what their profit sharing would be. That meant committing to a fixed percentage of profit to be distributed to the team. Now we divide our profit into a few buckets: taxes, savings, and profit for distribution.

Profit for distribution is then divided between three groups:

With the set 52% of profit for distribution going to the team each member can see how their daily decisions affect their own profit sharing checks.

Salary is not a factor

One key difference between our system and most other profit sharing systems I’ve seen is that we don’t account for salary. Our theory is that salary is a reflection of your market value and not exactly your value to the company. A higher market value such as an engineer versus a customer support team member is already reflected in salary, so we don’t need to account for it again in profit sharing.

A year ago someone on the team suggested going to Costa Rica instead of Oceanside, California for our winter team retreat. We thought it was a great idea and started to price it out.

Another time someone accidentally left an extra server running, which cost about $2,000 for the month. Once it was discovered and shut off the message from the team was clear, “It’s not a big deal in the grand scheme of things, but please be careful. It’s our money.”

As part of this we have 8% allocated for bonuses for leadership. This is based on quarterly goals each leader sets and the percentage they hit during that period. They also receive their share of the team profit sharing.

This is a simple system that is decently effective. It rewards smart goal setting and peer pressure from other leaders ensuring that you don’t set unambitious goals you are guaranteed to hit.

Round 4 — An established system

Now that we are gearing up for our fourth round of profit sharing I don’t think we will make any additional tweaks. We are happy with the numbers and system from last time and are excited for it to be a more normal part of our culture.

In the first three rounds we distributed $513,817 of profit to the team. Since we are focused on continuing to scale our revenue and profit while keeping our team small we expect these numbers to keep growing significantly as we get closer to our long-term goal of $100,000,000 ARR with a team of only 50 people.

There’s something special about being able to hand meaningful amounts of money to the team in a single cheque. Each time we do it is a highlight of my year. Give it a try for your company and let me know what you think!